Dawn Gifford SmFootprintFamSmallFootprintFamilysmallfootprintfamily
13 Comments
18,436 Views
3 Min Read
SFF may receive commissions from purchases made through links in this article. As an Amazon Associate I earn from qualifying purchases.

It is sometimes called rocket, roquette, rugula or rucola. It looks like a baby lettuce and is often compared to watercress, but its little known secret is that it is really just a common local weed, and a member of the cruciferous family related to broccoli and cauliflower.

In 2006, arugula became a symbol for the entire foodie movement with the publication of David Kamp’s book, The United States of Arugula: How We Became a Gourmet Nation.

In his book, Kamp explores how we evolved to a society where balsamic vinegar, free-range chicken, extra virgin olive oil, and of course, arugula, have become mainstream terms.

However, in 2008, arugula lost its luster when it became embroiled in political controversy. Unwittingly, arugula became a symbol of the culture wars in the presidential election and the media latched onto Barack Obama’s bewailing the price of arugula, much like it did when George H.W. Bush bad-mouthed broccoli.

Now the sordid details can come out: Arugula leads a double life.

Far from being a food for the elite, arugula can be found growing wild all over North America. Wild-grown arugula is more nutritious and mineral-dense than store-bought arugula.

If you can’t find a reliable wild source, arugula is very, very easy to grow, and you can find seeds in most good catalogs. It is seldom bothered by pests and grows very nicely in cool temperatures and moist soil alongside your mixed salad greens and baby lettuces. It also does well in cold frames.

Harvest arugula successively or as a “cut-and-come-again” crop until heat makes it bolt and taste bitter.

Arugula is a very nutritious, leafy green vegetable with an unusual spicy flavor. It is high in vitamins A, C and K, and folic acid. It is also a good source of zinc, potassium, calcium and iron.

Arugula of any type goes well in mixed salads, substituting for basil in pesto sauces and stepping in for spinach when required.

From its cruciferous family roots, arugula gets its antioxidant power as well as enzymes needed for detoxifying the body naturally. Recently, it’s been linked to gastric ulcer relief. Like other greens, arugula is most nutritious when eaten raw, and can be juiced or well-blended for optimal nutrient digestion and assimilation.

Here’s one of my favorite pesto recipes that we enjoy a lot this time of year. 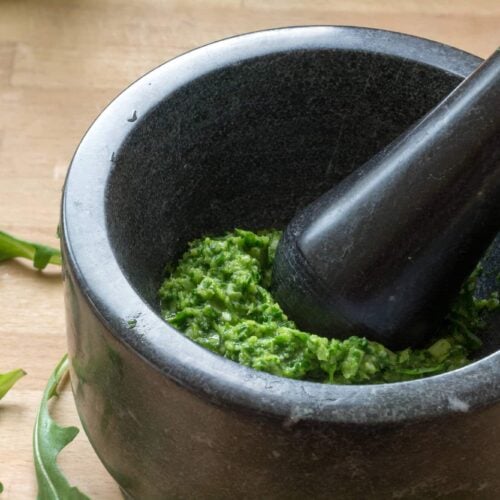 Four Raw Beef Recipes from Around the World