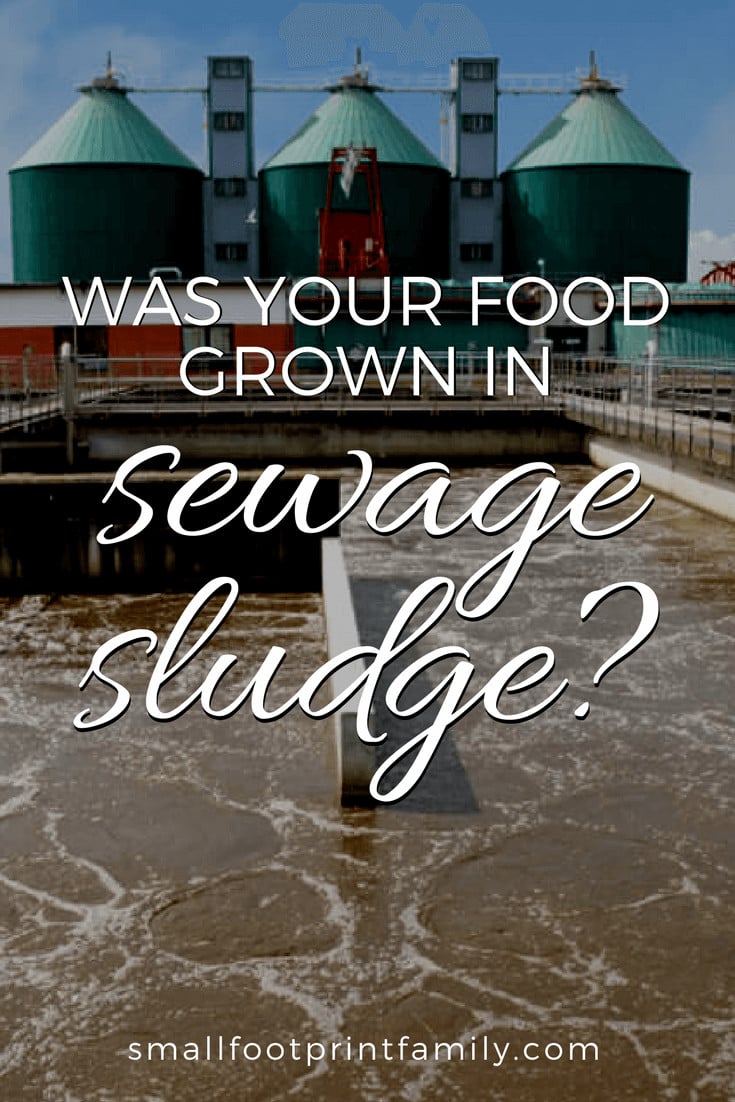 With all the poo-pooing of organic food in the mainstream media lately, I thought I’d post this week on one little-known reason to eat organic that might convince even the most die-hard organic skeptic:

Ironically, while industrial agriculture methods leave vast quantities of extremely useful animal manure to languish in toxic lagoons that destroy quality of life all around them, it is common practice for industrial farmers to use human waste-water treatment by-products, also known as sewage sludge (or, in industry PR-speak, “biosolids”), as fertilizer.

But, not all poop is created equal.

Theoretically human urine and feces (“humanure”) could make an effective fertilizer source for crops, and in a true closed-loop agricultural system, we would return all of our organic waste to the land.

However, human waste isn’t the only thing we flush down the drain.

This means that whatever the stew of sewage contains—things like drain cleaner, industrial chemicals, heavy metals, radioactive medical fluids, heart medications, antibiotics, birth control pills, statin drugs, etc.—will get into the soil, the food supply, and the ecosystem.

In fact, there are thousands of substances that can be found in typical sewage sludge, including any of the 100,000 or so chemicals produced and used in industrialized nations, many of which illegally end up in the sewers.

Anything that is washed down the sink, flushed down the toilet, or dumped into a sewer—and that is removed from water by the treatment process—becomes sludge.

According to research published in the European medical journal Acta Veterinaria Scandinavica, scientists have recently found antibiotic resistant “super bugs” in sewage sludge—and they are sounding the alarm about the danger of antibiotic resistant genes passing into the human food-chain.

Leena Sahlstrom, from the Finnish Food safety Authority, with a team of scientists from the Swedish National Veterinary Institute, investigated sewage sludge from a waste-water treatment plant in Uppsala, Sweden. The researchers gathered sludge from the plant each week for four months.

Out of the of 77 samples collected, 79 percent of these tested positive for the drug-resistant super bugs known as vancomycin-resistant enterococci (VRE).

Enterococci are bacteria that are normally present in the human intestines and the female genital tract. They can also sometimes be found in the environment. However, if the immune system doesn’t keep these germs in balance, enterococci can gain an upper hand and cause infections in skin wounds, the urinary tract, and the bloodstream—and the resulting illnesses can range from mild to life-threatening, especially for those with compromised immune systems.

But the risk VRE strains pose by getting into the food supply isn’t only related to the possibility people and animals may get infections from them. The Finnish research points out this disturbing possibility: VRE in the fertilizer-used sewage sludge may pass on their resistance genes to other bacteria, creating a host of new super bugs.

“Antimicrobial resistance is a serious threat in veterinary medicine and human healthcare. Resistance genes can spread from animals, through the food-chain, and back to humans. Sewage sludge may act as one link in this chain.”

If you needed any more reasons to eat only organic food, here’s a great one!

Just Say NO to “Biosolids”

Antibiotic resistant bacteria is a significant problem, but it is definitely not the only problem with using sewage sludge as fertilizer:

Fortunately, sludge-based fertilizers, or biosolids, are not allowed in certified organic agriculture.

One of the reasons that environmental organizations have either supported or not complained about the use of sewage sludge as fertilizer is that the alternatives of incineration or landfilling our waste are just as bad, if not worse.

But, according to some researchers, if the sludge is properly composted, it may be relatively benign. In fact, composting sewage sludge is being promoted within the organic movement by Compost Science, a sister publication to Rodale’s respected Organic Gardening magazine.

Others suggest that sludge can be recycled in a variety of ways that are both environmentally beneficial and sustainable, and don’t involve application of potentially toxic materials to croplands.

These include using anaerobic digestion to produce biogas, pyrolysis of the sludge to create syngas and potentially biochar, or incineration in a waste-to-energy facility for direct production of electricity and steam for district heating or industrial uses.

If methane from sewage sludge is captured rather than allowed to outgas, it can be used for fuel, closing the carbon cycle.

Until we can figure out how to properly compost or recycle all sewage sludge, we shouldn’t be using it on arable land at all! In the meantime, add the fact that you don’t want to consume antibiotic resistant super-bugs, heavy metals, pharmaceuticals or toxic pollutants to your long list of reasons to eat organic.