Did you know that most of your appliances—cell phone chargers, desktop computers, computer monitors, printers, televisions, DVD players, microwaves, coffee makers, and more—drain energy anytime they’re plugged into a socket, regardless of whether they’re turned on or off?

And not only that, but many electronics, like your plasma TV and your cable box, don’t actually go all the way off. Rather, they continue using “vampire power” all day and night, increasing your electricity bill.

What is “Vampire Power”?

Also called phantom power, standby power, leaking energy, ghost load, vampire load, or idol load electricity, vampire power is the energy that appliances and electronics waste just by being plugged in—even when they are turned off.

According to the Lawrence Berkeley National Laboratory, the average home contains 40 products that are constantly drawing power, even when they are not in use. A 2015 NRDC study shows that “idle load electricity” or vampire power—computers in sleep mode, digital video recorders, even certain kinds of electrical outlets—can account for 10 to 23 percent of power consumption in the average household, which can make up about a quarter of your electricity bill!

Nationwide, our idle gadgets and appliances suck up 100 billion kilowatt-hours of electricity—enough to power nearly 6 million homes—at a cost to consumers of about $19 billion a year.

That’s a ridiculous amount of money just thrown away on devices we aren’t even using!

And given that most of our electricity comes from coal and natural gas, there’s a steep environmental cost to all this waste: Overall electricity production represents about 37 percent of all carbon dioxide emissions in the United States, one of the main contributors to climate change.

For the amount of energy the average home throws away on standby or vampire power, you might as well let the next three or four tanks of gas you buy pour out onto the cement.

How to Reduce Standby Power Consumption

Here are some great ways to slay the “energy vampires” in your home:

Buy a low-cost watt-meter, measure all the devices in your home to see how much power they are really using, and take targeted action. (The Kill-a-Watt is a great, affordable tool for this.) You will be very surprised at what you discover and this exercise might even pay back the cost of the meter in savings.

As a general rule, the bigger—and older—the device, the more power it sucks up while it’s off. So it’s much more effective to unplug the decade-old TV in your guest bedroom than the phone charger that you bought last year.

Another tip: When you put your hand on the power adaptor, if it’s hot, it’s using a lot of energy. If it’s not hot, it’s probably not using very much energy.

Decide which appliances should be unplugged, put onto power strips or perhaps be replaced. Use your utility bill to gauge the results of your efforts.

Get in the habit of unplugging all sleeping or not-in-use appliances. (Lamps are exempt.) Better yet, use a switchable power strip for clusters of appliances, computer devices or electronic products. That way you can switch everything to zero with one switch or even a remote control.

(The Smart Strip and Belkin Conserve remote kits are made for this. You can use the Belkin all over the house, and since all our plugs are behind furniture, the remote switch makes a big difference!)

Plugging devices into timers will save you from having to remember to turn things on and off. This works particularly well with items you only use at specific times, like lamps or coffee makers. Devices like computers have built-in timers that can power them down automatically. Use them aggressively.

When shopping for new electronics and appliances, search for low standby products. (Asking a salesperson will probably be a waste of time.) Look for the ENERGY STAR label; these products have lower standby power draws.

Save Even More on Energy…

The Worst Energy Vampires in Your Home

The most power-hungry devices in your home should receive priority when deciding what to unplug or put on a power strip. Generally speaking, the biggest vampire power consumers in your home include:

Laptop computers and cable boxes (particularly the ones with integrated DVRs) are among the worst vampire power offenders.

The New York Times reported that cable boxes have an energy footprint far greater than their size would indicate. Indeed, the EPA estimates that cable box setups use about 500 kilowatt-hours per year—as much electricity as your fridge.

If you have more than one TV, you can request a multi-room box, which allows you to ditch all but one of your DVR devices. Put them on a power strip with your other entertainment devices, and turn them off when you aren’t watching or recording.

According to the EPA, computers account for 2–3 percent of overall household and office energy use in the U.S. Sleep mode is good, but not nearly as good as turning off and unplugging entirely as often as possible.

Laptops are more energy efficient, and screensavers save nothing. In fact, on a house by house level, a computer screensaver alone can cost about $60 a year in electricity to maintain.

While modems and routers that deliver WiFi to your home don’t use a lot of power, most households never turn them off, so over time the power they use while you are sleeping every night can add up. Put your WiFi system on a power strip, too, and turn it off right before you go to bed.

As a general rule of thumb, the bigger your TV, the more power it sucks, and the more diligent you should be about unplugging it or putting it on a power strip and shutting it off entirely each night.

Flat-screen TVs use about twice as much power as their smaller cathode-ray counterparts, and can waste as much as $160 worth of energy annually when in standby mode. That’s a lot of money for an appliance you’re not even using!

All those DVRs, bluetooth speakers, home theaters, and Blu-ray players add up. Cluster these devices on a smart power strip when you can. Don’t worry, many Energy Star-approved devices maintain their clock settings even when they’re powered off.

People tend to leave game consoles on all the time. A Carnegie Mellon University study estimated that power use by home game systems in the U.S. grew by 50 percent between 2007 and 2010 and now accounts for about 1 percent of total household energy use.

Interestingly, the same study found that the Nintendo Wii uses significantly less energy than other popular systems (Microsoft Xbox and Sony Playstation). Although many consoles now automatically switch to a power-saving idle mode after a period of inactivity, even “sleeping” games use some energy. Put it on a power strip and get your kid to shut it off entirely.

Because they use energy all day long just to sit there and show off pretty pictures, digital picture frames’ energy use is significant. Find an Energy Star version or show off your best snapshots framed in good, old-fashioned wood and metal.

When you slay the energy vampires in your home, you’ll not only save lots of money, but also preserve clean air and water by reducing national fossil fuel usage. And that’s a win for everyone!

Recommended in This Article 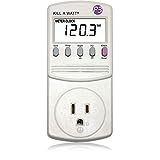