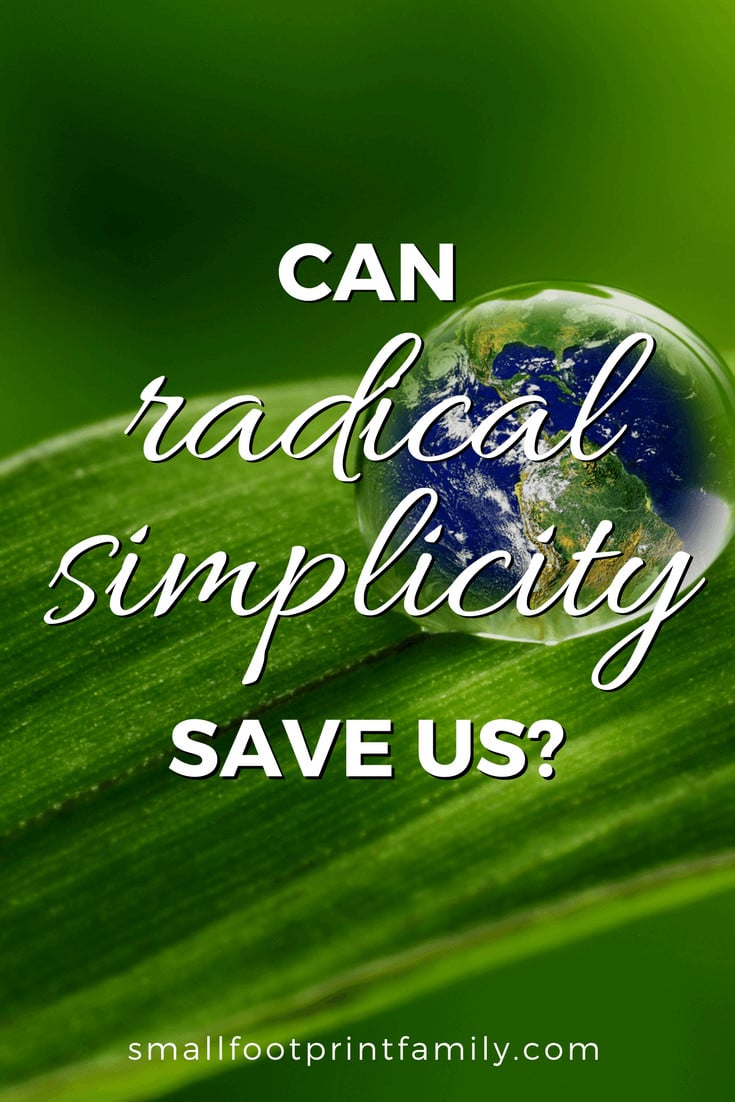 Everywhere around us, things seem to be getting more and more complex. And it’s not good for our health or for the planet.

Whether it’s 35 different choices in the water aisle (!) at the grocery store, or the new need for “smartphones” to organize every detail of our totally overwhelmed lives, or the gazillion forms you have to fill out to pay for medical care or to maintain your farm’s organic certification, we seem to be increasingly burdened as a society by overchoice, micromanagement, and unnecessarily convoluted bureaucracies.

When the continuous operation of a system relies on a long and complex chain of crucial suppliers and resources, all running smoothly, that’s pretty much a textbook example of an unsustainable system.

Put another way, the systems we take for granted to deliver everything from plasma-screen TVs to food and fresh water are significantly more vulnerable than we may think.

According to Keith Farnish, author of Time’s Up: An Uncivilized Solution to a Global Crisis:

“We have been sold The Complexity Myth: the idea that something is only good if it is a product of a complex set of processes, in order that it (or we) can be controlled. We are kept in check by this idea and do not question it because we have forgotten how to live simply; we have been brainwashed to love the world of the complex, and as a result we are prepared to defend the thing that is causing the collapse of the natural world, and our own basic humanity.”

To put it bluntly, we’ve become so utterly dependent on highly complex machinery, bureaucratic social structures and byzantine systems to provide for nearly every aspect of our living, that if a crisis happened (like extreme weather, diminishing groundwater, or running out of oil), we’d be up the proverbial “Sh*t’s Creek.”

I mean, would you be prepared if you lost electricity or water to your home for more than a week?

“Any intelligent fool can make things bigger and more complex… It takes a touch of genius—and a lot of courage—to move in the opposite direction.”

From greater health to greater happiness, simplification has so many benefits that it would not be possible to list them all here in detail. But here are four benefits that I think capture the essence of simplicity, and destroy the myth that complexity is a good or acceptable thing.

This is self-evident, for the fewer stages there are in any process, the less energy will be consumed overall. You could argue that heating a house with a load of wood and a hole in the ceiling is more energy-intensive than a combination gas boiler, but—setting aside the difference between renewable versus non-renewable forms of energy—in order to manufacture the combination gas boiler in the first place requires a similar number of processes as to manufacture a television.

If you want more efficient heating, building a rocket stove from a few aluminum cans or cinder blocks is relatively far simpler. In addition, the more stages involved in anything, the less accountability is possible, and thus the more opportunity for energy waste.

Following on from the previous point, accountability isn’t really about economics, it is about knowledge. If I were to buy a cord of wood that had originated from a forest far away, then it would have had to pass through a number of stages to get from the source to the user: the felling of the trees; the sawing and preparation of the timber; the movement to the port and subsequent transportation by sea and/or land to the point at which it is available to me, or at least the person who gets it to me.

Through these different stages I have progressively lost connection with the origin of the wood; I have no sight of the trees, I cannot feel the soil, I cannot smell the air where the tree once stood. I do not care. That is the way of the civilized. Compare this to a person who cuts her own wood from a tree she felled, and uses it to build a shelter. In other words, people connected to their resources do not poop where they eat.

As Thomas Homer-Dixon described so vividly in The Upside Of Down, complex societies are inherently unstable, for they rely on a multitude of different stages and processes connected by an equally complex set of linkages, any one of which can be critical to the efficient operation of the system as a whole. Bring down a major power line to a processing plant, shut down a distribution computer, or blockade a port, and the whole dependent system may break down, particularly one that is already under stress, as so many systems are in the just-in-time economy.

If you grow your own food, or ideally are a member of a local community of growers, then you may be vulnerable to seasonal aberrations or pests, but so long as you do it right then your food supply is safe, and not subject to the hazards of complexity.

Complexity is used to enforce the systems of control that the Culture of Empire uses to keep us subjects of that culture. One man with a sword can control perhaps half a dozen people without swords; one man with an agenda and a military establishment under his control can control entire nations.

Within a cooperative society, a simple society working on egalitarian principles, no one can wield power without challenge. You have a say, as does everyone, for there can be no ivory towers or impregnable fortresses in the simple society—you need complexity to build them.

According to Farnish, the mindset that brought us the equation “civilization = better living = mind-boggling complexity” is flawed and should be reconsidered in a 21st-century world of diminishing resources.

“Unless we are prepared to once again embrace the simple then we have no future as a species…except, perhaps those few remaining people who still live simply.”

There is no singular correct way to simplify our complex way of living. The challenge is to add a bit of radical simplicity and self-sufficiency to your life every chance you get. This means putting as few steps between you and what you need to be healthy and happy as possible.

Here are a few ideas:

What are you doing to radically simplify your life this year? 32 thoughts on “Can Radical Simplicity Save Us?”